Autism spectrum disorder, also commonly known as ASD, comes with many challenges, including social skills, repeating a specific behavior repeatedly, and sometimes can include the inability to speak. Data from the Center for Disease Control states that in the United States, one in every fifty-four children will be diagnosed with autism (Autism Speaks, n.d.). Signs of autism can appear as early as 18 months for some children, but on average, will show by age two or three (Autism Speaks, n.d.). If the is caught early, research shows that the child’s life in the future tends to be overall more positive.

While there is no one cause of autism, researchers say that autism develops from both genetic and environmental factors. Some believe that vaccinations cause autism. One article titled Vaccines Do Not Cause Autism quotes the following statement:

“Claims that vaccines are linked to autism or are unsafe when administered according to the recommended schedule have been disproven by a robust body of medical literature. Delaying vaccines only leaves a child at risk of disease. Vaccines keep communities healthy and protect some of the most vulnerable in our society, including the elderly, and children who are too young to be vaccinated or have compromised immune systems.” (Knopf, 2017)

This is a common misconception that started back in 1998 when The Lancet linked the MMR vaccine to the result of autism which was only tested on 12 people. Since this study, there has been no connection between vaccines causing autism, and this study was reported fraudulent a couple of years following (Knopf, 2017).

Scientists have also found research to support an increased risk of autism as the age of parents increases and if there is a large gap between the age of parents, specifically an age difference of ten years or more (Sandin et al., 2016).

Females Versus Males With Autism

Autism spectrum disorder is most common in males, with four males to every one female diagnosed (Giarelli et al., 2010). Girls, especially those who do not have a impairment, have a high chance of being misdiagnosed or not diagnosed until a later age compared to boys (Giarelli et al., 2010). Many studies show that boys tend to have a better chance of receiving an early and proper diagnosis than girls because of their behavior. In contrast, girls tend to not “act out” as much as boys, which often does not receive a proper autistic diagnosis (Duvekot et al., 2017).

To see if the test is accurate, according to Moore & Goodson (2003),children are tested at age two and then again around age four to five. Children do not tend to improve their communication and social skills between the ages of two and four. Research shows that if the scores worsen on the second assessment, those children often will be more violent and have more behavioral problems. Just like anything, if autism is caught early, action steps can be put in place to set the child up for success in the future. (Moore & Goodson, 2003). 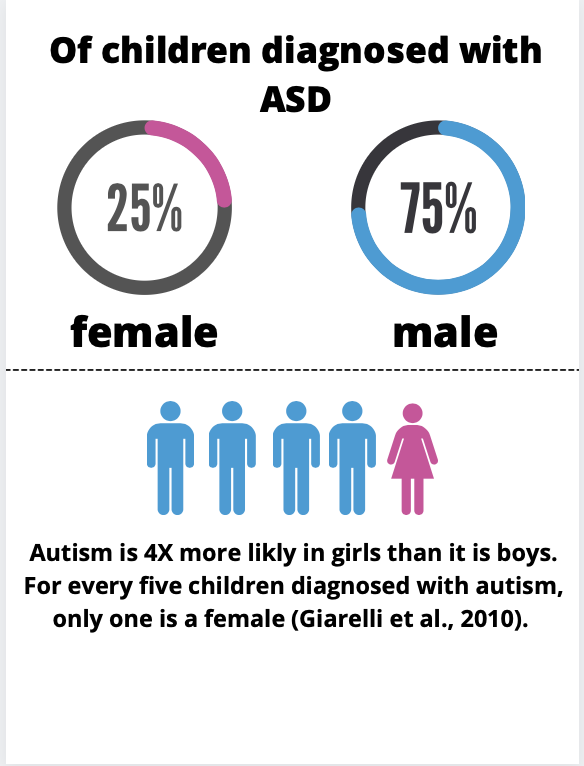 Not only do children who have ASD face many challenges, but their parents do as well. Parents who have autistic kids mentioned that some of the hardest obstacles they face each day are “challenging behaviors, dealing with judgment from others, lack of support, and impact upon the family” (Ludlow et al., 2012). Of the 20 parents interviewed, 16 out of 20 said that behaviors included temper tantrums that were often unpredictable, aggressive behavior, and their child obsessing over certain things, leading to more stress on the parent. In this study, four moms reported struggling with depression. Of the four moms, two of them were diagnosed with , and one felt suicidal. (Ludlow et al., 2012) It is important to understand that having a child with autism is a battle for the child and his/her entire family.

Autism is a disorder that greatly affects both the child who is diagnosed and the people around him/her. Because boys are four times more likely to be diagnosed than girls, it is important to know the signs, symptoms, struggles, and myths that go along with what it is like to care for and help someone who has autism. Children with ASD can experience a wide range of symptoms, but two common areas include a lack of social communication and increased repetitive behavior. Some communication challenges include back and forth dialogue with another person, inability to hold eye contact, and not understanding hand gestures. Repetitive behavior includes repeating the same words in conversation, an inability to adapt to a change in routine, and strong attachments to particular objects (Lord et al., 2018). 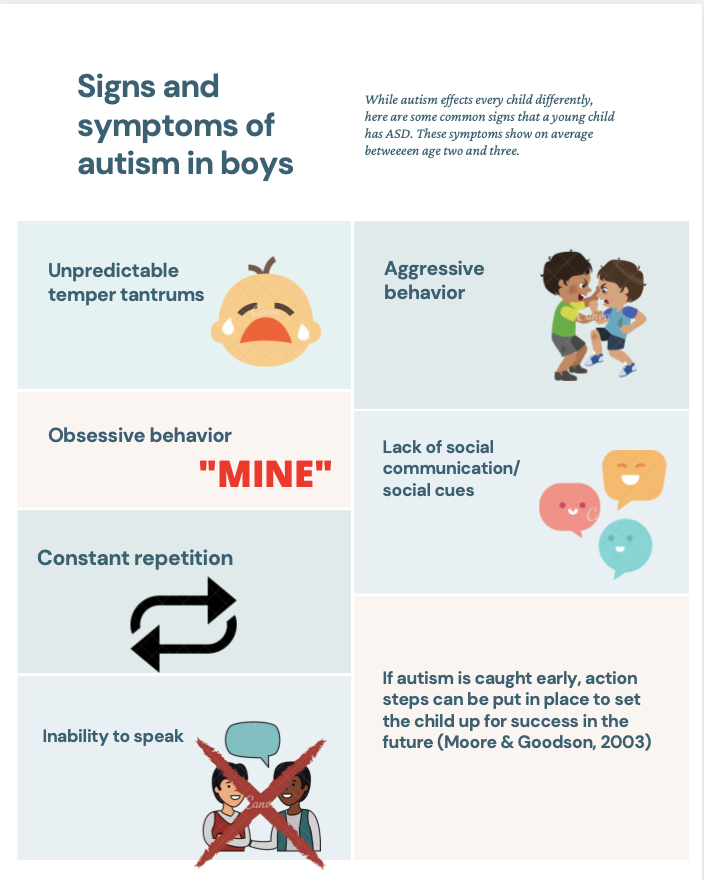 Autism spectrum disorder is a common developmental disorder that affects the ability to communicate and interact with people. Signs and symptoms of autism can appear as early as 18 months, and males are four times more likely to receive a proper diagnosis than females because of their behavior. Parents of autistic kids face many challenges including depression, feelings of helplessness, and an increase of stress. At this time, there is no known cause of autism, however, having an early diagnosis is the best scenario in increasing the overall quality of life. Below is an infographic that covers the information above in a visual.

1. Why do boys have a better chance of receiving a proper autism diagnosis than girls?

A. They tend to not speak until later in childhood

B. Their behavior is more aggressive

C. They are more attached to their mom

D. They don’t develop brain function until later in childhood

2. Boys with autism show all of the following symptoms except:

B. Obsessiveness over specific things

C. Unable to sleep through the whole night

3. Although the cause of autism is unknown, scientist believe all of the following factors increase risk EXCEPT

B. Age of the parent at pregnancy

relating to, being, or involving conscious intellectual activity (such as thinking, reasoning, or remembering)

a feeling of deep sadness, anxiety, etc., that a woman feels after giving birth to a child

Autism in Boys by Marissa Guimbarda is licensed under a Creative Commons Attribution-NonCommercial-ShareAlike 4.0 International License, except where otherwise noted.