Domestic violence (DV) is becoming one of the top health concerns in the United States. By understanding what DV is and what the signs of abuse are, people can take more action to prevent DV from happening to someone they love. Merriam-Webster defines DV as any violent or abusive behavior directed by one family or household member against another (Domestic violence, 2021). DV is a pattern of abusive behavior that is typically done to gain control over a victim. There are many types of abuse that are considered DV including physical abuse, sexual abuse, , economic abuse, , threats, and stalking (Mayo Clinic, 2020). Each of these types of abuse causes serious health problems that can greatly affect the health of victims.

DV is a serious problem for people of all shapes, sizes, and ages. In the past, DV was referred to as “wife abuse”, and the definition of DV was confined to only abuse against wives. This definition has been changed to account for the fact that wives are not the only people who fall victim to DV. The current definition of DV victims includes all people regardless of , education, race, age, sexual orientation, religion, or gender. DV is more common in certain groups of people. Females are more likely than males to be victims of domestic abuse, with about 29% of women experience this kind of abuse in their life (Baugher & Gazmararian, 2015), and about 1 in 10 men (CDC, 2020). American Indian/Alaskan Native women experience the highest rate of lifetime victimization. Asian/Pacific Islander women generally have a lower rate of domestic abuse. Homosexual males are also more likely than heterosexual males to experience abuse (Grossman & Lundy, 2007). 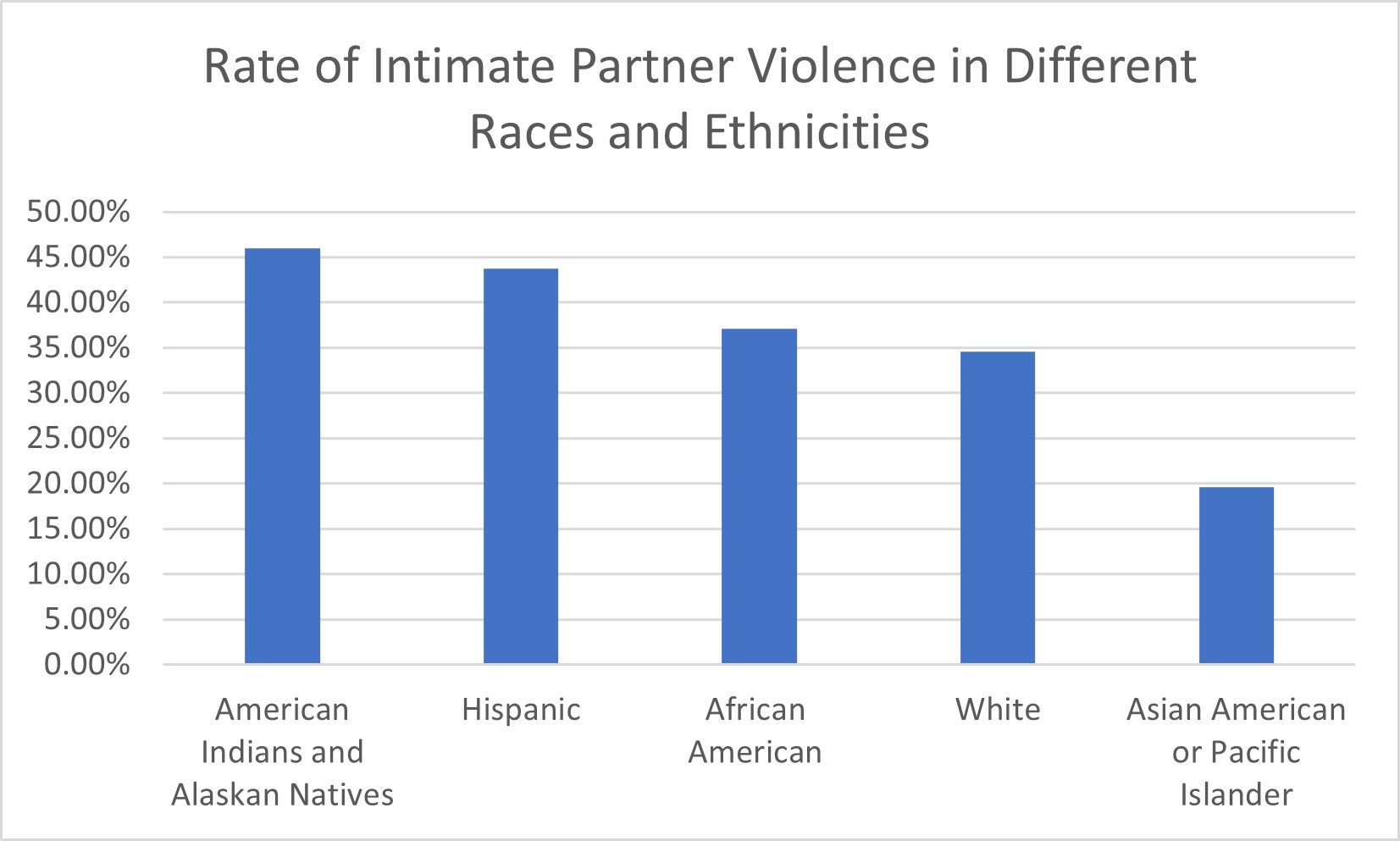 “Rate of Intimate Partner Violence in Different Races and Ethnicities” by Acadia Morgan is in the Public Domain and was created based on Urban.org.

There are many reasons why DV rates are different across different populations. One of the most important factors is socioeconomic status (SES). There is a correlation between poverty and race/ethnicity and people of color are less likely to be poor compared to white people. This means that SES is a better predictor than race/ethnicity because of the increase in differences between groups due to economic factors. Research has indicated that ethnic differences in rates of DV often decrease when social class, occupation, and employment status are taken into account (Grossman & Lundy, 2007).

Males as the Victim

Male victims of domestic violence often struggle with knowing or admitting they are being abused. The male stereotype of strength, power, and leadership hinders men from reporting violence for fear of being seen as weak or unfit. is severely overlooked in men. Nearly 1 in 4 men have experienced some form of sexual violence in their lifetime. 97% of men who experienced rape, physical violence, or stalking by an intimate partner had only female abusers (CDC, 2020). This shows that interpersonal violence is severely overlooked in men because the numbers of abuse towards men are startling. It is common for men who experience DV to not realize they are a victim. Male survivors of domestic violence often act out verbally or physically against their abusers during times of conflict. The abusers then use this outburst to make the victims think they are the ones at fault. To hear a man’s personal DV experience, please watch the following TED talk by Andrew Pain.

Andrew Pain – Domestic abuse: not a gender issue by TED is licensed under CC BY-NC-ND 4.0

There has been an increased awareness surrounding domestic violence against women from the Me Too Movement and other media movements, but these movements included a very small amount of focus on domestic abuse against men. The framing of domestic abuse as an issue faced by women and not men negatively influences men’s ability to understand and label their abuse (Wallace et al., 2019). Many people hear DV and immediately think women are the only victims, but that is so far from the truth. Men experience domestic abuse too, but men often do not seek help for this violence until the abuse has become extremely severe. Males are much less likely to report cases of domestic abuse for fear of the authorities not believing them or being seen as weak.

DV can negatively affect health in many different ways. Children exposed to domestic violence are more likely to experience developmental problems, , problems at school, aggressive behavior, and low self-esteem. The cycle of domestic abuse usually starts in childhood and can be carried on throughout a person’s lifetime. Research has found that domestic violence is linked to serious psychological disorders and excessive drinking (Mayo Clinic, 2020).

Many people who experience abuse face post-traumatic stress disorder (PTSD) as a result. PTSD is a very serious disease that can cause terrifying memories of the event, nightmares, flashbacks, or distress as a result of a trauma. PTSD in victims of domestic violence can cause problems in all aspects of their lives and relationships. Both men and women that are exposed to domestic violence have increased odds of attempting suicide. DV takes a huge toll on mental health which can also lead to substance abuse (Dufort et al., 2015).

DV is a huge issue in the United States and the rest of the world. This issue is overlooked in men, and men are typically viewed as the perpetrator and not the victims. This stigma needs to be overcome in order for the world to make improvements in the prevention of domestic violence.

DV victims often follow a circular pattern of abuse called the cycle of violence. Abuse in a relationship is often not random and typically follows a three phase cycle of a tension phase, a crisis phase, and a honeymoon phase. The tension phase is when the relationship between the victim and the abuser is becoming strained. The abuser begins to become argumentative, angry, criticizing, and testing. The abuser may use coercion, threats, or minor fights to subdue their victim. The tension gets worse and worse over time. This phase can go on for any amount of time. During this time of tension, the victim often begins to feel the looming sense that something bad will happen and they are walking on thin ice.

The tension phase goes into the crisis phase when the explosion of violence occurs. This can be any form of abuse such as physical, emotional, or sexual abuse. This is the phase when an injury occurs. During this phase the abuser often asserts their power in other ways by isolating the victim to hide their abuse, they keep the victim from seeking help or contacting the police, or restrain the victim to keep them subdued. This is the most dangerous phase that most characterizes as DV.

After the tension phase, the relationship transitions into the honeymoon phase. This is the time when the abuser seeks to apologize to the victim to try to mend the relationship and regain the victim’s love and trust. The abuser could promise it will never happen again, and say they will seek help. Justification is often used by the abuser to try to justify their actions to the victim, for example, the abuser could blame their behavior on drugs or alcohol. Love is built back up as the victim is showered with compassionate words, actions, and gifts. It is during this time that the victim feels as if things will get better, and they begin to feel love or trust for their abuser again. Unfortunately, this phase will not last, and it is only a matter of time before the relationship enters the tension phase as the cycle continues (Metropolitan Police Department, n.d.).

These phases tend to repeat themselves over time, whether it be over days, months, or even years. Sometimes the time between cycles gets shorter as abuse continues and the abuser gets more and more unstable. The longer a relationship lasts, the faster the cycles turn which makes it extremely important to seek help for abuse before the situation worsens. Love, fear, and hope can be the reasons why victims stay in an abusive relationship and continues in this deadly cycle.

DV can happen to anyone, it is not just a problem for women. It can be difficult to identify if someone is in an abusive relationship. Men often struggle to see themselves as the victims which makes them less likely to seek help. DV can cause many negative physical and psychological health effects including low self-esteem, PTSD, bruising, fractures, reproductive issues, and many more. The cycle of violence can be extremely hard to stop. If the partner is physically aggressive, unpredictable in expressing emotions, controlling of time and money, verbally threatening, or isolating someone; they may be experiencing DV. If you or someone you love is experiencing DV, please reach out to the National Domestic Violence Hotline at 800.799.SAFE or visit their website https://www.thehotline.org/ for help and support.

1. What rate/ethnicity experiences the highest rate of domestic violence?

A. The Effective Altruism Movement

B. The Me Too Movement

3. Children who are exposed to domestic violence are more likely to experience which of the following issues EXCEPT:

Reach Out. (2021). Domestic violence and what you can do about it. Abuse and violence | ReachOut Australia. https://au.reachout.com/articles/domestic-violence-and-what-you-can-do-about-it.

any act including confinement, isolation, verbal assault, humiliation, intimidation, infantilization, or any other treatment which may diminish the sense of identity, dignity, and self-worth

A form of abuse that involves a person exposing another person to behavior that may result in psychological trauma, which includes anxiety, chronic depression, or post-traumatic stress disorder

The social standing or class of an individual or group. It is often measured as a combination of education, income and occupation

Violence between two or more individuals

Domestic Violence by Acadia Morgan is licensed under a Creative Commons Attribution-NonCommercial-ShareAlike 4.0 International License, except where otherwise noted.